This morning, the Financial Times ran an article highlighting calls from Andreas Utermann (CEO of Allianz Global Investors) and Anne Richards (Chief Executive of Fidelity International) for a shift away from the relentless pursuit of economic growth which lies at the heart of modern capitalism.  It may well be time to consider alternative economic models to address the crises of biodiversity collapse, climate breakdown, and burgeoning inequality at a fundamental, systemic level.

Buddhist Economics – a term coined in 1955 by German economist and statistician E.F. Schumacher – is one such alternative, calling for economies designed to maximize wellbeing while minimizing consumption.  It recognises that unchecked consumption growth is putting unprecedented strain on the natural world, whilst providing little or no discernible improvement in terms of wellbeing.

This is reflected in some metrics which have been put forward as alternatives to GDP. GPI (or the Genuine Progress Indicator) is one such indicator; it takes GDP and subtracts the social, environmental, and economic ‘bads’, as shown below.

Estimates suggest that the global GPI/capita has flat-lined and even slightly decreased since the late 1970s, despite continued economic growth (in GDP terms).  Life satisfaction in almost all countries has also stagnated since the mid-1970s.[i] If we’re serious about improving human and environmental wellbeing, GPI improvement looks like it could be a far better policy target than continued pursuit of GDP growth at any and all costs. 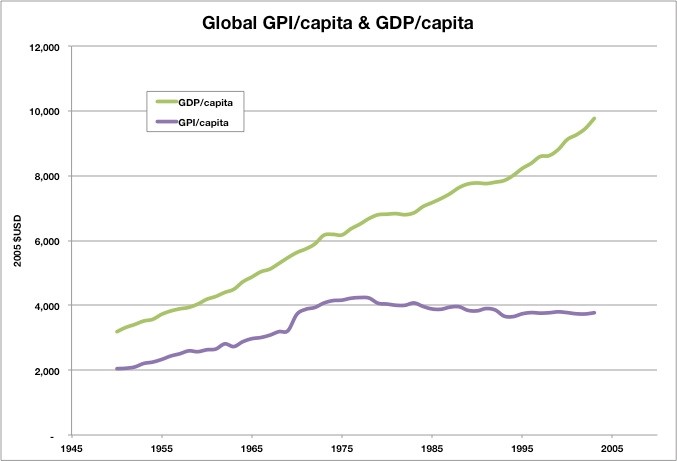 Adjusted global GPI/capita and GDP/capita. GPI/capita was estimated by aggregating data for the 17 countries for which GPI or ISEW had been estimated, and adjusting for discrepancies caused by incomplete coverage by comparison with global GDP/capita data for all countries. All estimates are in 2005 USD. Source: Kubiszewski, I., et al. ‘Beyond GDP: Measuring and Achieving Global Genuine Progress’, Ecological Economics, Vol.93 (September 2013).

Whilst Buddhist Economics has strong micro-economic resonance and a powerful focus on behavioural change, its challenge to the current capitalist economic models is profound. The kind of economies which predominate today are, to Buddhist Economics, less advanced than ones which respect ecological limits.  This is pointed out by advocates of the concept of ‘natural capital’.  Our economies are burning through this ‘capital’ – in many cases, quite literally – as though it were income, depleting natural capital stocks as if they are infinite.  Recognising this is a first step. As Buddhist teacher Thich Nhat Hahn states, “we need a collective enlightenment to stop [our present] course of destruction”.[ii]

In individual terms, Buddhist wisdom traditions offer an effective ‘middle’ path; one which lies between the extremes of hedonistic self-indulgence and sensual pleasure, and some kind of asceticism.  Their notion of balance is crucial.  The message is that we need to be much better at meeting people’s needs, and curbing excesses. After all, needs are limited; wants are limitless!

Interestingly, some of Buddhist Economics’ key features are being adopted in a diverse range of geographies. In Latin America, the idea of ‘buen vivir’, nurtured by deep cultural traditions that prioritise ecological balance and community wellbeing, has emerged as an alternative to ‘developmentalism’. It has led to the enshrining of Nature’s rights in Ecuador’s Constitution and Bolivia’s Ley de Derechos de la Madre Tierra. In India, grassroots local projects that exercise ‘radical ecological democracy’ and that do not necessarily seek to scale up are taking hold.[iii]   A similar undertaking has occurred here in the UK, with the advent of so-called ‘transition towns’. These movements are small, with local communities at their heart, but they are still significant. They strive to meet humanity’s needs today without compromising the biosphere and without compromising the needs of future generations – one of the most common definitions of ‘sustainability.’ In many respects, they are much more aligned with the principles of Buddhist Economics than with those of the prevailing capitalist models.

As we see discussions about wellbeing and environmental sustainability come increasingly to the fore, examples such as these are held up as practical alternatives. Space is opening up for concepts such as Buddhist Economics to be considered more seriously. At the heart of these debates is a recognition that the current system has some fatal flaws in terms of its ecological (and socio-political) sustainability.

Having worked in a responsible investment role since September 2019, the question of quite what the purpose and objectives of investing might look like in a world geared towards maximizing human and planetary wellbeing whilst minimizing consumption is a fascinating one.  As the necessity of wholesale systemic change becomes increasingly evident, it’s one the investment industry as a whole would do well to consider.